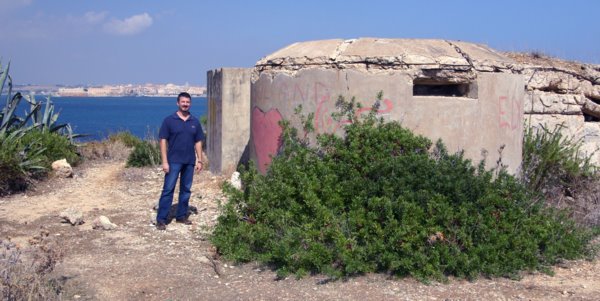 Roberto Piccione in an old WW2 gun battery, with Syracuse in the background across the bay.

Beside a perfect tourist cove, where no tourist goes, opposite the golden walls of the old fort of old Syracuse across the bay, stands a derelict World War II gun battery. All the pillboxes, emplacements, bunkers, command centres, barracks, shelters and ammunition dumps still remain, crumbling in the sun, or pitched into the sea from crumbling cliffs.

Modern graffiti in garish colours shares wall space with neatly painted Fascist slogans, whose black lettering remains perfectly preserved deep in the cool tunnels, but whose sentiments were obsolete even before this place faced its test in the battle for which it was built.

Roberto Piccione is showing me round the site. As we walk among the jumbled concrete, talking, he bends, hardly breaking his stride, to pick up something nestling among the mandrake flowers in the sandy soil. He shows me a bent and corroded rifle cartridge. “We could look it up later, to find out if it is British or Italian,” he says. It could be either, for on the night of 9/10 July 1943 an SAS raiding party, together with some mislaid British airborne troops, came here to prevent the battery from barring Syracuse harbour or shelling the Allied seaborne forces landing further south at Cassibile and Avola. These landings marked the permanent return of Allied troops to the Continent, and were the first in a series of assaults that carried the Allies into Germany (although not, in the end, through Italy), to end the war in Europe. 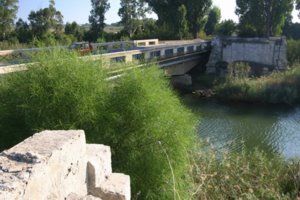 The modern Ponte Grande bridge beside the ruined piers of the old bridge.

It has poured with rain for the last few days, veritable biblical deluges by English standards, and it is the rain that has brought the buried detritus of war to the surface. A similar autumnal deluge apparently washed away, after the war, the Ponte Grande, the old bridge south of Syracuse that those mislaid airborne troops had been sent to (and did) capture on that flare-filled night of fire and fear in 1943.

Roberto, who is a youthful 37 and lives in Syracuse, runs Impavidus, a charitable association dedicated to the remembrance of those far off days in this corner of Sicily. Impavidus helps anybody with a stake or an interest in lo sbarco (as the landings are known), whether they be octogenarian veterans of the airborne and seaborne operations, or modern soldiers keen to learn lessons from this landscape and its history, or friends and relatives of those who fought and died here. 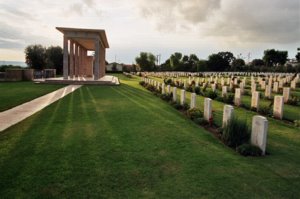 In July 2003, for example, Impavidus assisted veteran Allied glider pilots returning to Sicily to commemorate the 60th anniversary of the landings. Last year soldiers from the modern South Staffordshire Regiment visited Sicily on a training exercise. The Staffords (one of the units involved in the 1943 airborne landings) were guided around the battlefields by Impavidus, which may be one reason why they did not get mislaid this time around. On another occasion, at the request of a veteran who could not come to Sicily and whose friend was killed beside him during the landings, Roberto took a photograph of the friend’s grave in the Commonwealth War Cemetery in Syracuse and sent it to England. 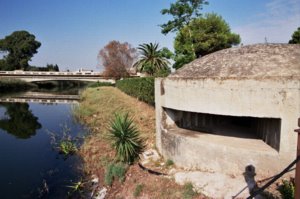 Doing this is far from easy. The memory of the war in Sicily, like the indestructible bunkers visible everywhere along the coast and on the old main roads, looms large, if generally unremarked from day to day. Like the buried spent munitions, however, those years also lie hidden, and reminders awaken memories many would rather forget.

Roberto tried hard to find Italian veterans willing to meet the British soldiers, usually a clubbable bunch who view the meeting of old adversaries and allies after all these years as a pleasure and a privilege. He did not have much success. “Italian witnesses don’t come forward,” he says, “because they probably feel they will either be tarred as Fascists, or shamed for having run away.” Although modern Britons will see no shame in the Italian reaction against Fascism in the war’s later years, and in their effectively siding with the Allies before as well as after the armistice in September 1943, many older Italians are only slowly coming round to seeing how precious their memories are to their countrymen.

Readers of Impavidus’s website may also be puzzled to see this disclaimer on its home page: “Whatever the veterans’ nationality, the Association is apolitical, and in no way propagates or disseminates any political or ideological agenda”. When I first read that, I wondered why anyone would think a charitable association helping veterans and researchers would be anything but apolitical, but this of course is a very English view to take.

Roberto explains that there are in fact a few local groups interested in the history and memory of lo sbarco, but that they tend not to cooperate, each having its own very strong views and each going its own way. “It’s very political,” he says. “If you’re on the left, you can’t be on the right, and vice versa. It’s sad how we don’t help each other and keep each other informed, but that’s very Sicilian. Impavidus believes in helping everybody”. This is not simply altruistic, as Roberto believes that casting your bread upon the waters will bring the fabled thousand-fold return. When it comes to discussing the site of a possible further museum about lo sbarco, however, Roberto is firmly on the side of his home town, and favours Syracuse over rival contenders such as Catania, Avola or Cassibile. 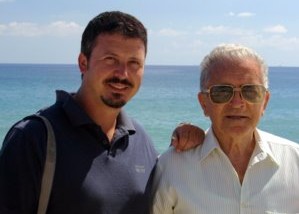 Before I leave Sicily Roberto arranges for me to meet his father, Prof. Michele Piccione, who was present when the British landed. He was a driver and despatch rider in the Italian army, and was in Avola on a training course. He was captured and kept in a makeshift POW camp next to the beach, where the prisoners helped out in the bloody aftermath of strafing attacks made on the beach by German aircraft. We meet on the promenade of that very beach in Avola, and I am overwhelmed once again by the Sicilian custom of showering gifts on strangers like me. As his father talks, recounting his experiences here, I can see where Roberto gets much of his character from, and how both father and son share that strange mixture of calm, generosity, passion and independence which seems to characterize the people of this island.

Like many Sicilians who first met the British when invaded by them, Prof. Piccione remembers the relief that local people felt to discover that the British were not monsters, and the fair play and sympathy they received from them. Many developed a fondness for their former enemies that remains strong to this day. Despite this, remembering does not come easy. When I ask that absurd but indispensable old journalistic standby, how does he feel about it now, he replies, visibly moved: “It is not a nice period of my life to remember”. I am also moved, but more by the generosity of spirit that has nevertheless brought him to this once horrific place to help me understand what it was like, and what it all might mean now. It seems he has inspired the same courage, the same generosity and the same vision in his son.

This article first appeared in ‘Rivista’, the journal of The British Italian Society in 2005.

The information in it relates to that time. Roberto has since (2014) become a fully qualified tour guide, and arranges personalised guided tours for individuals and groups to Sicily’s many historic sites and sights. He also leads battlefield walks and tours.