‘The Airborne Forces Experimental Establishment’ is an academic book in style, but it’s full of interesting nuggets of information about the personalities, politics and technology involved in developing Britain’s parachute and glider forces. 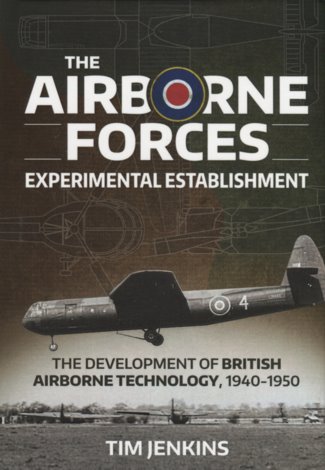 Review of “The Airborne Forces Experimental Establishment – The Development of British Airborne Technology, 1940-1950” by Tim Jenkins, published 11 September 2015 by Helion.

‘The Airborne Forces Experimental Establishment’ is written in an academic style. This is both a strength and a weakness. The strength is that there is not much reliance on other people’s books, and there are lots of quotes from archival documents. It also means the book is full of interesting information that you feel you can trust, because it is cited verbatim and fully footnoted, so you can check for yourself, should you want to. The weakness is that the academic style does not lend itself to easy reading. The beginning of the book is the hardest going.

The good news is that things pick up significantly after you get past the opening exposition of the arguments, with its references to the arguments of other academics. Once you get into the meat of the book, the sentences become much more readable and abstraction is replaced with factual information. This information is often used to make an inference or support a theory, but it’s not overdone.

The book’s primary theory is that Britain’s airborne forces were created out of a vacuum by the god-like fiat of Winston Churchill. In a minute dated 22 June 1940 he famously demanded the creation of a force of 5,000 airborne soldiers. Prior to this, nobody had actually examined whether there was a need for them, how they might be used, or whether they could be afforded. The armed forces had not stated a requirement. In particular the development of assault gliders swung into high gear without any consideration of which aircraft might tow them, or where such aircraft might come from. The author maintains that this lack of prior requirement and analysis meant that development was haphazard and lacked direction, and greatly hindered the effective use of airborne forces on operations throughout the war.

If you disagree with this hypothesis, then you get plenty of chances to examine the evidence. The bulk of the book is devoted to looking in detail at how the development of gliders and airborne technology progressed during the war. Sometimes the argument seems a bit thin. There were indeed no suitable British tug planes available for most of the war. The British Horsa and Hamilcar gliders were indeed developed without first considering what might tow them. But like the American Waco, which was designed around the Jeep, the British gliders were designed around what they were intended to carry, i.e. a platoon of men, or a gun and its jeep, or a light armoured vehicle.

Would the designers have seriously compromised what the gliders could carry if they had approached the problem from the point of view of what could tow them? How different would the gliders have been if one particular strategic or tactical use of airborne forces had been stated in advance rather than another? And given the rapid changes of doctrine that war brings about, based on the hard lessons of actual combat, would any pre-stated requirement have remained intact? Military requirements are like military plans, of which it has famously been said: “No plan survives contact with the enemy.”

But the author doesn’t just stop at saying there was no prior requirements analysis, which any business consultant will tell you is indeed A Very Bad Thing. He goes on to say that actually there was a requirement behind Churchill’s apparently irresponsible demand for airborne forces that there were no resources to build. It’s just that the requirements were not operational but psychological and connected with morale.

On the one hand Churchill knew the terrors and doubts that were even then transfixing the British armed forces and the British people. The German airborne operations in the Low Countries (e.g. the glider assault at Eben Emael) had shocked everybody. There was a universal paranoia about imminent airborne attacks on Britain, and hundreds of thousands of men were scattered about guarding positions well away from the front lines because nobody knew where such an attack might come. If the UK had its own airborne forces, they would surely have the same effect on the enemy.

On the other hand, marooned in our island fortress following the evacuation from Dunkirk, there was no way to hit back, it seemed, except by using the RAF. The soldiers of the Army had become increasingly depressed with this defensive posture, the enforced idleness, and the uncertain waiting. The creation of forces like the Commandos, SOE, paratroopers and glider troops gave our men the chance to hit back, and to terrorise the enemy in his own heartland.

The author examines several such operations. One was the glider attack on a viaduct in Italy (Operation Colossus). Another was the glider attack against the heavy water plant in Norway that could help the Germans develop an atomic bomb (Operation Freshman). A third was the parachute raid on the German radar installation at Bruneval in France (Operation Biting). Such strikes boosted not only the morale of the armed forces, but also the morale of the entire population of Britain, and indeed of its allies all around the world.

The detailed examination of these operations in a book that is apparently about the Airborne Forces Experimental Establishment (AFEE) could seem out of place. Indeed, the contents of the book are quite variable. After the opening arguments, there is a useful examination of key personalities who affected Britain’s wartime production process, including Lord Beaverbrook and Churchill himself. Then the time line runs through the antecedents to the AFEE, and some of the scientific personalities involved, with a digression at one point into the origins of military Operational Research. Some of this is very interesting, but comes across in quite a disorganised way. There also seems to be a dichotomy in the book between being a history of AFEE (as implied by the title) and propounding the hypothesis that the lack of a clear requirement hindered Britain’s airborne forces. As it turns out, the book doesn’t quite do either convincingly.

In the end, you could argue that this variableness is irrelevant. The book is packed with interesting nuggets and useful background information that is not readily available elsewhere in books about Britain’s airborne forces. There are also mentions of many developments that were investigated regarding the use of gliders, some of which led nowhere: dropping paratroopers from gliders; rocket assisted take-off; snatching gliders from the ground; the cable angle indicator; a tug to glider intercom; explosive landing arrestors.

It is also surprising to see the extraordinarily long list of aircraft designed for other purposes that were exhaustively tested for use by paratroopers or as glider tugs. It is clear that the lack of transports and tugs bedevilled not only operation after operation, from Sicily to Arnhem, but also the efforts and resources of airborne research establishments for year after year. What might have been developed if the time spent testing tugs was spent on something else? Intriguingly, there was work done early on into “Rotachutes” and helicopters.

It is quite possible to ignore the academic aspects of this book and enjoy it for its numerous examinations of personalities and their rivalries, the stuttering progress of airborne developments, and the weird and wonderful ideas that were entertained. Treat it like a quarry and excavate whatever interests you.

This entry was posted in Gliders in WW2, Reviews & Profiles and tagged Hamilcar gliders, Horsa gliders. Bookmark the permalink.