For over 75 years the fate of a lost Wellington bomber remained a mystery. Detective work on land and in the sea has confirmed its fate and that of its crew. 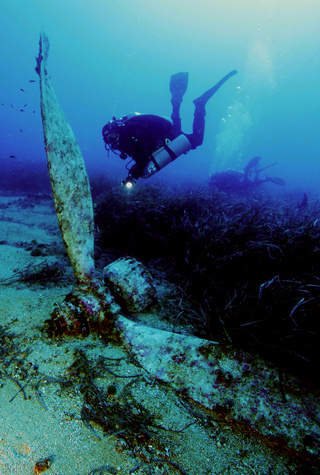 Divers dwarfed by one of the Wellington bomber’s propellers.

In September 2017 a friend of mine sent me a link to a piece in The Times newspaper. The article said that the wreckage of an RAF Wellington bomber had been discovered on the seabed near Syracuse in Sicily. It was found by Fabio Portella of the Capo Murro Diving Center, who is an expert on the wrecks of these waters, having already found three other WW2 aircraft in the depths.

I was immediately intrigued by the Wellington discovery, as the part played by a crashing bomber in the story of Operation Ladbroke has been one of its enduring mysteries.

George Chatterton’s “The Wings of Pegasus” was one of the first books I studied for my research into Operation Ladbroke, the glider assault on Syracuse on 9 July 1943. The glider attack under cover of darkness was the opening move of Operation Husky, the Allied invasion of Sicily. Chatterton was the CO of the Glider Pilot Regiment at that time, and his book was the first full-length, first-person account of the operation.

His views on the operation have been the subject of several of my articles, some of which challenge them (see here and here). It is of course the job of a historian to treat all sources with caution, not least because witnesses usually contradict each other. One of the stories Chatterton tells piqued my curiosity, but also some wariness. It concerns a bomber crashing into the sea near him.

Chatterton flew in Operation Ladbroke as a glider pilot at the head of his men, in one of the first gliders to be released. Like so many others [story], Chatterton’s glider landed in the water. In his case it fell close to the cliffs of Cape Murro di Porco south of Syracuse [map]. He and the men with him decided to swim for the shore only about 100 yards away, where they:

“took refuge  a few yards from the sea. Suddenly there was an ear-splitting explosion, bombs dropped all round us, and an aircraft hit the sea with a tremendous crash, just where we had been swimming. The whole sea caught fire.”

Using a memorable image, he describes how the flames, which lapped the shore, reminded him of brandy set alight on a Christmas pudding. He was presumably looking at spilled aviation fuel spreading on the surface and burning blue.

Among several questions which his story of landing in the sea raises, some relate to the ambiguity of these words. Did the bombs explode? If not, how did he know they were bombs? If they did explode, why does he mention only one explosion? If they did not, then what did explode? Was it the aircraft hitting the sea? As for the “just” of “just where”, does it mean “exactly where”, or does it also imply “just a moment ago”?

Some of these questions are answered by an earlier account in “Lion With Blue Wings” by Ronald Seth, who extensively interviewed Chatterton. He describes how no sooner had the men clambered ashore than there was :

“a colossal explosion above them. Looking up, they saw a Wellington aircraft on fire from nose to stern. It fell like a stone […] Only a moment before they had been swimming in that now fiercely raging sea.”

It is explicit that the plane exploded in the air, and that it fell where the men had been swimming shortly before. However there is no mention of bombs.

Now a home for sea creatures – a wheel from the Wellington bomber.

As my research progressed, I oftened wondered about that bomber. On one of my occasional visits to the National Archives (NA) in London, I decided to investigate. My starting point was a clue in the book “Assalto a Tre Ponti” (“Assault on Three Bridges”) by the Sicilian historian Tullio Marcon. In it he quotes from a Wellington pilot in 142 Squadron RAF, who described bombing Syracuse that night.

So my first task in the NA was to find the ORB (Operations Record Book) for 142 Squadron. To my dismay, it was only available on microfilm. Like most (all?) researchers, I dislike working with microfilm. The images are negatives and the photography is often bad. The films are fiddly to focus and line up. It is impossible to jump forwards or backwards easily, or to browse rapidly, as you can with paper. The screens tend to be too bright in the centre and too dark at the edges, a particular problem if you try to photograph them. Printing the images on photocopiers rarely works well, is slow and, in quantity, is expensive. Given the bad image quality, the fact that many ORBs were recorded in 1940s handwriting compounds the problems.

I persevered with this and other mircrofilmed air force records, but then came upon some that had been photographed so badly that they were literally impossible to use. These records belonged to a collection coded AIR 51. Tragically (for a historical researcher at least), the original documents had been thrown away before they got to the NA [story]. The information had been lost forever. Copies of some of the documents must exist in other collections, but as a coherent set available in one place, that’s it. Gone.

I don’t often get to the NA, and every hour there is precious, so I decided to give up on the bombing angle. Emotionally I was dispirited and repelled by the microfilm, while rationally I was impelled to mine more profitable seams. There were still thousands of paper documents waiting to be scoured, in which I stood a greater chance of striking archival gold quickly, and with less pain.

One such strike was my later discovery of a war diary that showed where the SAS Special Raiding Squadron (SRS) landed on Cape Murro di Porco [story], up to that point another mystery. The SRS had been sent to the cape to destroy an Italian gun battery that posed a severe risk to the ships of the invasion.

This SRS mystery was related to the mystery bomber because Chatterton described how the SRS landed right where he and his men were huddled on the shore, which was of course where he said the bomber hit the sea. Incidentally, it was probably the battery’s AA guns that shot down Chatterton’s glider, and then also persuaded his group to swim ashore by firing at them in the water.

Some time later I was contacted by Ian Buchan. Ian is the son of glider pilot Lt William Buchan, who was First Pilot of Waco glider 57 in Operation Ladbroke. His glider came down in the sea off the cliffs of Cape Murro di Porco, not far from Chatterton’s. Ian kindly sent me copies of his father’s diary and logbook, which inspired me to write a “Glider Story” about glider 57.

As I gathered research about glider 57, I found numerous accounts by airborne and SRS soldiers who mention seeing a bomber at the cliffs of the cape [example].  I speculated in the article that the underwater Wellington wreck found by Fabio Portella was the same aircraft that these witnesses saw. I posted the article and left it at that. 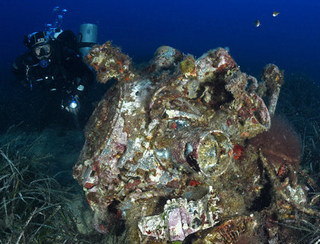 A diver inspects the remains of one of the Wellington bomber’s Hercules engines.

Then last year I was contacted by Nicola Giusti, who works closely with Fabio. He had seen my speculation in the glider 57 piece, and he wondered if I had any information about the squadron the Wellington might have belonged to. This contact by Nicola was the impetus that made me look again at my long-shelved mystery bomber project. In the time since I had last delved into the air force sources, two things had happened that now made the research speed along.

First, the encyclopaedic “History of the Mediterranean Air War 1940-1945, Volume 4”, covering 1943, had been published. This steps through both the Allied and Axis air operations day by day, describing actions and listing claims and losses. This made it extremely simple to see which Wellingtons had been lost that night. It also gave the list of squadrons that made up 205 Bomber Group RAF, which was responsible for bombing in support of the glider troops of Operation Ladbroke [story].

Second, I discovered that the ORBs for 142 Squadron and the other Wellington squadrons of 205 Group had been digitised from the microfilm. To my astonishment and delight, they were available for download from the NA website for a small fee. No more microfilm! And no need to trek to London to sit in the archives to review the documents under pressure of time.

I downloaded several PDFs and passed relevant details on to Nicola, who in return sent me a document and other information that enabled us to confirm the identity of the wreck. Some of the witness statements of course contradict each other, but several confirm Chatterton’s story. The existence of the wreck in exactly the expected place is the final clincher.

A remaining  question about Chatterton’s  account is of that of the bombs which he says fell with the plane, without saying if they exploded or not. Other witnesses describe bombs falling, but some say they saw bomb explosions on the cape, while others imply they landed harmlessly in the water. The stricken bomber in fact carried no bombs, but only flares. It seems these (apparently described by one witness as “starry bombs”) were jettisoned or fell from the plane as it fell. Any bombs exploding on the cape must have come from a different aircraft.

A few witnesses also saw two parachutes, which were presumably crew members from the plane. If so, it seems the men must have drowned after being  carried out to sea by the north-westerly gale, ending up in the bay like many glider troops, but without the benefit of a floating glider to cling to.

Doubts about many points will probably always remain, but the most important mystery, the identity of the missing crew, has been solved. In my experience, relatives of those killed in WW2 mainly want to know two things: details of what they did, and where they lie. Furnished with this information, they can visit, reflect, pay respects, lay a wreath, and finally say goodbye.

“Aircraft took off for operations, but failed to return.”

The wreck of HE 756 is now an official dive site of the Area Marina Protetta Plemmirio.

Photos courtesy of the Capo Murro Diving Center, with special thanks to Nicola Giusti.