Victor Miller’s sketches show us something no photograph can – what it felt like to be in the front seat in a massed glider assault.

A glider pilot’s eye view of the descent into danger. Horsa gliders crowd down into LZ Z at Wolfheze near Arnhem on 17 September 1944, the opening day of Operation Market Garden.

Glider pilot Staff Sergeant Victor Miller fought in and survived three of the great glider assaults of World War 2: Sicily, Arnhem and the Rhine. He kept a diary throughout, which formed the basis for his book, “Nothing Is Impossible“. He also sketched the scenes he saw, and the experiences he lived through.

In a way that no photograph possibly could, his drawings capture the essence of an assault landing by glider: the crowded air above the LZs, the venomous flak, the hapless crashes, the breathtaking power of massed gliders packed with troops descending to the attack.

The sketches here are selected from the second edition of his book.

Left: The day after Operation Market Garden began, Miller sketched this Hamilcar glider, number 317, named “Olive”, on the heath at the south end of LZ Z.

Right: Horsa gliders bringing reinforcements for Arnhem during Operation Market descend into a maelstrom of flak, wheeling in an attempt to identify their LZs.

Left: A Horsa glider near Arnhem  looks broken-backed, but in fact the tail has been removed deliberately to extract its cargo, probably a jeep and an anti-tank gun.

Right: Another view of Horsa gliders bringing  reinforcements for Arnhem. As some gliders land, others still on tow can be seen approaching in a sky pockmarked with flak bursts.

Right: A smashed Horsa on German soil during Operation Varsity. Other Horsas plunge on full flaps towards the ground through a blizzard of flak. 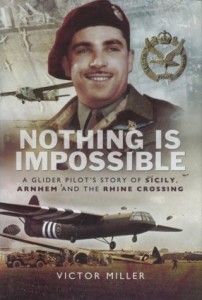 The second edition of “Nothing is Impossible”  can be bought from the publisher Pen & Sword Books [here].

You can read my review of the book [here].

With thanks to Chris Miller for permission to use his father’s drawings, which are copyright Victor Miller.

Thanks also to Pen & Sword Books for supplying the  images, which appear here in low resolution.

A version of this article appeared in “The Eagle” magazine of the Glider Pilot Regiment Association.