The Story of Glider 46 – Kicking the Hornets’ Nest

Glider 46 landed in a hornets’ nest of Italian defences. For good measure it kicked the nest first by trying to land on the roof of a pillbox.

Glider 46. What looks like a track is in fact the main coast road, and it leads to a strongpoint not far behind

Holmes was second in command of 9 FCRE, and deputy to its CO Major Beazley. He was in charge of the engineers that had been allotted to support the 2 South Staffords in capturing and neutralising their objectives. A second detachment was allocated to the men of 1 Border. 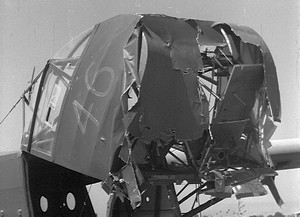 In terms of position, Glider 46 did indeed make a good landing not far from the edge of LZ 1 [map].

However a later examination revealed that the glider had hit an Italian pillbox as it landed. The chances of that happening must have been infinitesimally small, given the size of the area around the LZs and the comparative rarity of pillboxes:

“Landed parallel to stone wall and struck top of pill box that protruded from wall. Landing gear washed off on pill box and under portion of nose slightly damaged. Wing struts slightly bent from landing gear.” 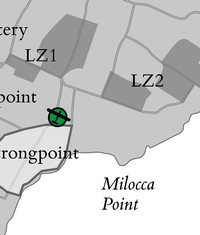 It’s not clear from photographic evidence exactly where this pillbox was. Glider 46 ended up just over 100 yards north of the barbed wire entanglements protecting a major Italian strongpoint based around the farm Masseria Palma [map]. Intelligence maps showed a pillbox not far behind the wire. A Waco’s landing flight was long and shallow, so perhaps Glider 46 hit the top of that pillbox and coasted on to a skidding landing nearly 200 yards away.

Winds caused correction. Searchlights and AAA fire on point de Milocca. Could not get identification for homing. Scattered clouds along route.”

The war diary of 9 FCRE reported:

“Company H.Q. consisted of Major B.S. Beazley R.E. and driver who travelled with the 2nd S/Staffords under whose command was Captain J.N. Holmes R.E. and No. 3 Section [in Glider 46]. Their role included the destruction of a coastal battery [Mosquito], dismantling charges in [Waterloo and Putney bridges] and establishing a water point for the Brigade as an extreme shortage of water was expected. […]

The landing about 2330 hours did not go according to plan. Gliders were very dispersed only three of the Company’s eight arriving anywhere near their Landing Zone. The result was that instead of the ensuing battle being a co-ordinated Brigade effort, it turned into innumerable small fights, the Commanders of the Glider Loads attempting to reach their Company objectives. The only Sapper to reach his objective in time to be effective was the O.C. [Major Beazley]. He reached the [Ponte Grande] bridge six hours after landing and removed the charges.

The remainder fought by themselves and with the infantry making for the road bridge which was reached by most Sapper Gliders loads on the evening of the 10th., when they were relieved by the 8th. Army. “

‘This glider landed about 1000 yards S of the centre of the L.Z. It came under fire from two M.Gs straight away, and consequently, attempts to unload the hand-cart were stopped.” 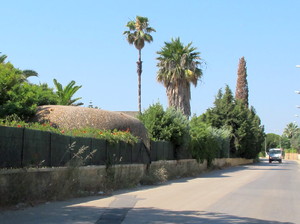 A pillbox in the Masseria Palma strongpoint. Today it’s in a garden, still beside the road.

Glider 46 had unfortunately landed in the middle of a hornet’s nest of several Italian defence posts. Not just landed in it, but kicked it first by striking a pillbox. That pillbox was behind it. Another pillbox also forming part of the Masseria Palma strongpoint was less than 350 yards to its right [photo][map], while an Italian garrison held the farm at Casa Gallo [map], some 300 yards to its left.

“The S/S [subsection] moved north towards the concentration area. It again came under rather erratic fire, and it was decided to lie up and keep a watch for some of our own men. No one had appeared by dawn so we again went north for the coasts, but struck an enemy patrol. I decided to disengage, but in doing so the rifle and Bren groups became separated. However, the two separated parties continued towards “Waterloo” [the Ponte Grande bridge], lying up for considerable periods due to enemy activity. One party with myself finally joined up with Lt. O’Callaghan and his men, and arrived at “Waterloo” at 1700 hrs. The other party came in by itself at 2000 hrs to “Walsall”.’

Holmes’ arrival at the Ponte Grande was slightly more exciting than he gives himself credit for. Lt O’Callaghan, another 9 FCRE officer, has the story. He had landed with a platoon of South Staffords in Horsa glider 135. After several fights they reached the area of Walsall [map], south of the Ponte Grande. O’Callaghan wrote:

“Capt Foot of the South Staffs [Glider 5] and 10 S/Section [9 FCRE Glider X] joined us here. After a rest of about an hour we decided that the bridge must be in enemy hands and decided to re-take it. As we were moving up to the bridge I met Capt. Holmes and a few Sappers from 9/S/Section who joined in the party. We had almost reached the bridge when a number of Bren Carriers of the 8th. Army moved on to the bridge and captured it.”

If correct, this means that Foot’s party must have finally numbered about 60 glider troops, a sizeable force by Operation Ladbroke standards, and almost as many as had held the bridge for most of the day against the Italians.