The Story of Glider 107 – Escape and Evasion

Glider 107 landed near an Italian garrison who shot at it the instant it landed, and then patrolled for survivors.

Glider 107 with its wing ripped off. The offending tree branches are evident in and near the wreckage

Out of 13 gliders carrying men of A Company, only two landed in Sicily. Glider 107 was one. The other was Glider 95, which carried men attached to Company HQ. We do not have a list of names of the Border troops in Glider 107, but Pvt Hartshorn later remembered three besides himself:

“Good tow. Intercomn went u/s half way over. Glider released on correct run in at 2240 hrs at 1600 ft approx 400 yds from coast and landed successfully in field next to L.Z.”

Carr was killed, so presumably the report was furnished by Matthews.

It’s not exactly correct in implying the landing was close to the LZ. In fact Glider 107 landed WSW of its target LZ 2 [map], about one kilometer from the  LZ’s closest point and two from its centre. However it was certainly good enough, and far better than many, being not far from LZ 1 and a direct route northwards towards the troops’ objectives.

An examination after the battle revealed:

Carr came from the village of Clydach, near Swansea in Wales. A letter in the archives of the Army Flying Museum, apparently from another Clydach man, recounts what happened to him:

“I met two sergeants of Army Airborne Corps [glider pilots]. They were friends of the boy Carr from Sunny Bank. You know he was posted “missing” in the Sicily affair. They told me that he had been killed. He had landed his Glider successfully and, meeting small-arms fire, had made a successful get-away to a hide-out.

He then returned to his Glider and was shot while doing so. His co-pilot named Matthews ran to his aid but found that Carr was already dead. The two sergeants said that they had lost a good comrade and were sorry about it. Apparently Carr was an extremely popular member of his squadron; he excelled in both football and cricket, and above that, was an extremely capable Glider-pilot. I am so sorry to have heard of his death. […]

Perhaps you would like to pass on this information. However sad it is, I am sure his parents – he was their only boy – would like to know that he did his part and did it well.

The praises from his two companions were quite spontaneous, and although it was sad hearing their story, it made me feel very proud to think that a Clydach lad had carried out his job exceedingly well, for he landed his plane and all his comrades without casualty. He is buried near Syracuse. I am sorry this airgraph contains such a sad story.” 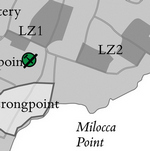 The brief report in 38 Wing’s “Summary of Interrogation Reports” is identical to the Air Landing Brigade’s (see above).

Glider 107 landed close to an Italian HQ in a farm called Casa Gallo [map]. The glider may also have been fired on from a nearby Italian strongpoint centred on another farm, called Masseria Palma. The glider came under fire as soon as it landed. Some 50 years later Hartshorn recalled:

“[We were] fired on as we crashed. Seven of us got away and we did not meet any of the Allies until Sun [the 11th] at about 4-00 pm [when] we met up with the SAS. Up till then we had only seen Italians.”

Glider 107 after its encounters with trees and wires

If Hartshorn’s memory is correct, then he and his fellow Borderers might have encountered the SAS SRS near a farm called Luogo Ulivo, where the SAS men had spent the night of the 10/11th. However it was not much more than 1000 yards north of where the glider landed, which would mean it took the Border men nearly two days to go about a kilometer, which seems unlikely.

Hartshorn’s use of the phrase “got away”, i.e. “escaped”, echoes the phrase “made a get-away to a hide-out” in the letter about Carr (see above). Perhaps Italian gunfire and Italian patrols kept the glider men pinned for quite a time. An Italian account emphasises this.

Casa Gallo was garrisoned by men of the 3rd Company of the Italian 385th Coastal Battalion. One of its officers was Lt Maurizio Rossi. He later recalled:

“About 21:30 on the 9th some 100 British gliders with about 2000 paratroopers landed in 3 Company’s sector. We were immediately put on alert and engaged in combat all night & part of following morning. […] After a careful sweep, we captured about 120 British [glider] troops, who were sent to Battalion HQ. After a relative calm until noon, we were attacked by a British seaborne battalion. We fought for an hour until we were overcome by their greater numbers. […] I was captured along with my CO Capt Lucchesi and about 40 men of 3 Company.”

Casa Gallo was captured on the 10th by the leading troops of 2 Royal Scots Fusiliers (RSF). A signal sent immediately afterwards reported: 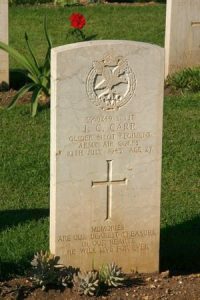 The route spelled out in the message had only recently been captured after fighting at both of the latter places and elsewhere along it, with some RSF casualties. These were presumably dealt with first. Plus vehicle unloading back at the beaches had been held up, so it is unlikely that any ambulances arrived any time soon. As a result, farm carts were usually the first form of ambulance.

With thanks to the Army Flying Museum for permission to use Carr’s photograph, and to quote from the letter about his death.

Carr is buried in the CWGC Cemetery at Syracuse.