The Story of Glider 126 – A Rare Good Landing

Glider 126 made a good landing not far from the LZs, a rare occurrence in Operation Ladbroke. This is the story of the men who flew in her and fought for the Ponte Grande bridge. 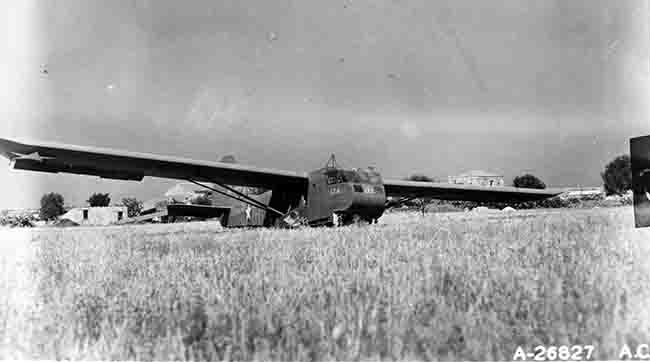 Waco glider 126 in the stubble field. Beyond its tailplane on the left, 100 yards away, can be seen the wing of Glider 26 near a farm outbuilding. In the background on the right can be seen what is today the Hotel Villa Fanusa.

This list has too many men in it for one Waco (stated maximum capacity 13, excluding the glider pilots). Apparently the troops listed above were split between Glider 126 and Glider 126A, which does not have a manifest listed in the original document.

3″ mortars, even broken down into parts, plus mortar bombs in useful quantities, were heavy, and the men had up to 5 miles to go, mostly on dusty tracks. Some form of wheels was essential. Usually glider troops used the airborne handcart for this purpose, not the airborne trolley, which was designed for use by paratroopers, as it could be folded into parachute supply containers. Perhaps there were not enough handcarts to go around, so the platoon was given five trolleys instead.

A separate report clarifies that it was the tug, not the glider, that was struck by rifle calibre bullets. This is odd, as the aircraft was presumably way out over the bay, out of the range of Italian small calibre weapons. Some machine guns may have been in tobruks (open-topped concrete or rock emplacements), but mainly they equipped the standard roofed pillboxes on the coast, and these were not well suited to anti-aircraft defence. It is known that at least one Albemarle gave support to its glider after release by shooting at targets such as Italian searchlights. Perhaps Wylie’s plane was hit in the darkness by stray British bullets.

“Good tow, intercomn failed after 10 mins flight. Glider released at 2310 hours at 1600 ft about 1/2 way across bay between PUNTA DI MILOCCA and MURRO DI PORCO and landed about 1 mile S.W. of L.Z. No casualties but undercarriage came through floor.”

Interestingly, the tug and glider pilots’ reports differ significantly on release time and height. 18 minutes is a lot, for men who had presumably synchronised watches just before take off. As for the height, for many a glider 200 feet was enough to make the difference between landing in the sea or on land, i.e. life and death. Some Wacos had trouble with their altimeters, which registered too high, but a 200 foot margin still seems excessive.

Green marks the spot. Glider 126 landed just south of and between LZs 1 and 2

Glider 126 landed in a flat, open, stubble field only 300 yards from the south-west corner of LZ 2. It made one of the best landings of the night, close to its LZ and only losing its left wheel on touchdown. The wheel was forced up into the glider through the floor. The glider ended up facing south-west, so apparently it turned or circled at some point, unless the loss of its wheel made it pivot 90 degrees left. Another glider, Glider 26, carrying a surgical team under Captain Rigby-Jones, landed only 100 yards away, next to a farm outbuilding. There was a large pillbox behind barbed wire 400 yards to the south of Glider 126.

The other half of the mortar platoon, which was in Glider 126a, never arrived. It developed aileron trouble in Africa and released near its own airfield. It damaged its undercarriage by doing so, presumably by landing in the rough. 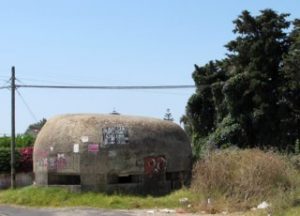 The large pillbox 400 yards south of Glider 126’s landing spot, as it is today. It had clear sightlines on the glider and may have machine-gunned it.

Not much is known about what happened to the men of Glider 126 after they landed in Sicily. The glider would have made a perfect target for the pillbox only 400 yards away, so perhaps the men were machine-gunned as they disembarked. Glider pilot S/Sgt Jimmy Fairgrieve (of Glider 25) said he saw the First Pilot of Glider 126, S/Sgt Chandler, at the Ponte Grande bridge.

Since Chandler reached the bridge, it’s possible that the rest of the men in Glider 126 also reached it, probably after dawn. Perhaps they were able to lug their 3″ mortar to the Ponte Grande – a mortar was a key part of the defence of the bridge until it ran out of ammunition. If they did reach the bridge, most of the Glider 126 men were probably killed or wounded.

Fairgrieve and Chandler were part of a small group of glider men who hid in a ditch after most of the surviving airborne troops had surrendered to the Italians. According to Fairgrieve, the men were looking ‘glum’. This seems a classic piece of period British understatement – these days the word would probably be ‘gutted’. The men managed to evade capture. More of their story will be told in my book.

Until only a few years ago the scene was almost unchanged since the time of Operation Ladbroke. Now extensive building of new houses and roads, plus new farming techniques, has changed the look dramatically. The farm is still there, but whenever I have passed the field it has usually been covered with plastic tunnels instead of stubble (the farm is private and did not welcome my curiosity when I knocked). The fine-looking house in the right background of the photograph is now the Hotel Villa Fanusa, named after the area and the nearby beach. The pillbox is still there, and an electricity substation in a small tower that was present in 1943 completes the picture. (Observations accurate at the time they were made, although things may since have changed).