‘SAS Rogue Heroes’ is a readable and enjoyable account of the SAS in World War 2. But there’s not much about the SAS in Sicily, and what there is, is not great. 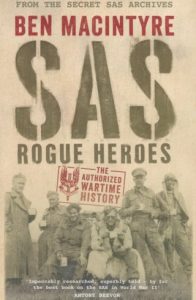 [This review focuses mainly on the section about the invasion of Sicily.]

‘SAS Rogue Heroes’ is published by Viking, whose one-liner mission statement appears on its website as:

“We publish books that combine brilliant writing with popular appeal, both fiction and non-fiction.”

And this is what you get with this book: an entertaining read that is sure to be a bestseller.

The author, Ben Macintyre, is a journalist, and indeed there are many gems of journalistic turns of phrase. For example:

“Paddy Mayne, a man with enough internal demons … to populate a small hell …”

“Stirling was very good at escaping; but he was very bad at staying escaped.”

Students of the invasion of Sicily probably already know Macintyre from his book “Operation Mincemeat”, about ‘The Man Who Never Was’. This is the story of a corpse loaded with misleading intelligence, which was intended to deceive the Axis into believing that Sardinia and not Sicily was the Allies’ next target.

All of the above might make you buy this book.

But if you’re looking for a history book, where you can trace and corroborate statements, then the lack of footnotes citing sources may put you off. There are also unattributed quotations, again frustrating for historians. Macintyre freely admits that ‘this is not a specialist military history but a book for the general reader’. He also points out that it is not comprehensive and he has had to be very selective.

On the plus side, this is not a work of unalloyed and reverential hero-worship – some scepticism has been allowed in. David Stirling’s famous tale of how he broke into GHQ in Cairo to present his founding proposal for the SAS is not swallowed whole. Similarly, Stirling’s story of recruiting Paddy Mayne straight from a jail cell is challenged.

The book’s cover trumpets that this is “The Authorized Wartime History”, “from the secret SAS archives”, which apparently means that the SAS Regimental Association allowed unusual access to its archives. Unwary buyers might infer that this means that the book is an ‘official history’, but Macintyre points out that this is not the case. Nevertheless you might expect the book to contain new material never seen before. It may do, but without cross-checking many other books in great detail, it’s hard to say. It seems to me, however, having read many of those books over the last ten years or so, that there is nothing especially new here, certainly not in the overall shape and feel of the story.

Regarding the book’s treatment of the area of this website’s special focus (Operation Ladbroke and the invasion of Sicily), I can say with more confidence that there is nothing particularly new. The Sicily section of the book reads like a summary of predecessor books, with some of the juiciest nuggets cherry-picked. All of which, of course, is good for readable, popular histories. But the Sicily story is also in places garbled and misleading.

There are about only six pages devoted to Sicily, including training in Palestine. Of these, about three pages concern 10 July 1943, when the SAS (as the SRS) tackled Italian gun batteries south of Syracuse. Of these three pages, about half describe the assault on the battery on the cliffs at the cape [story], while the other half covers the actions in the Maddalena Peninsula overall.

This last part is the weakest. It’s not clear that there were four batteries in total, nor that the first battery was cleared, and the success signal given, before the second was approached. The statistics given apply to all the batteries, again unclear. It would have been useful if some of the scepticism shown elsewhere in the book was applied to these numbers and some other parts of the tale. Elsewhere, Johnny Cooper is quoted as being in the Augusta landing, when according to his own book he missed Sicily altogether. Finally, a small point, but one which annoys some glider veterans – the glider men are called ‘paratroopers’ in the book. They were not, since the air landing (glider) battalions were not trained in parachute jumping.

None of this should stop you buying the book if you enjoy a gripping story well told. But I wouldn’t recommend buying it just to study its Sicily section.