The seizing of the fortress of Eben-Emael was an extraordinary coup. Germany’s best glider pilots gave Hitler much to crow about, and the Allies much to fear. Was this spectacular glider assault strategically necessary, or was it a barn-storming diversion and a propaganda stunt? 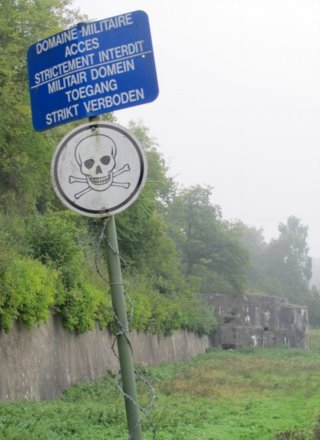 Morning mist shrouds the huge hill that is the fortress of Eben-Emael. In the distance is Bloc 6, one of the six massive bunkers that defended its exterior.

The fort at Eben-Emael is big. As you approach, you see a hill, and might well wonder if the fort is somewhere on top of it. Then you see the massive entrance bunker, and realise that the entire hill is itself the fort. So of course the top of the fort is also big. It is also flat, and arranged like a huge sports arena, with bunkers and gun emplacements on embankments placed around the field like spectator stands. On the one hand, this big flatness seems to beg for the glider assault which took place here. On the other, it seems a miracle that any gliders survived landing in the centre of the ring of guns.

The story is well known, but bears a brief retelling. On 10 May 1940, the first-ever airborne assault by glider was launched by the Nazis. They landed troops on top of the Belgian fortress of Eben-Emael, where the highly-trained engineers in the gliders promptly disabled observation posts, defences, and heavy guns. These guns guarded three bridges over the deeply-cut Albert Canal, on the Belgian border. They threatened German forces punching through Holland via Maastricht, who needed the Albert Canal bridges intact so they could deploy quickly into the heart of Belgium, and head towards France. So neutralising the fort’s ability to use its guns was only part of the plan. The Germans also launched history’s first ever glider coup-de-main assaults on bridges, and seized two of the three Albert Canal bridges before they could be blown up by the Belgians.

The Albert Canal at Veldwezelt, near Eben-Emael, the site of the first-ever assault by glider designed to take a bridge (like Operation Ladbroke). The depth and width of the canal made a formidable obstacle.

The Germans were inventive and clever. The use of gliders at Eben-Emael was not the only innovative part of the operation. The German engineers were also equipped with hollow charge explosives, which could penetrate steel and concrete many times more effectively than normal explosives. Their use at the fort was another first in the history of warfare. In Rotterdam, German float planes carrying troops landed on the river, in a manner similar to a land-based glider assault, to seize bridges.

The Germans were also underhand and ruthless during the invasion of the Low Countries. The German ambassador did not inform the determinedly neutral Belgians that their nations were at war until after the attack had begun, and the fort and bridges had already been seized. German commandos were dressed as Dutch policemen to dupe the defenders of the bridges in Maastricht. The civilian centre of Rotterdam was bombed despite a ceasefire. Civilians were executed. British prisoners of war were massacred.

The Power of Propaganda 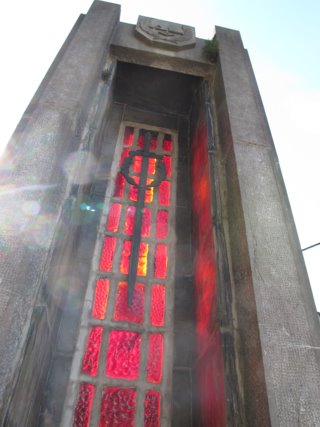 Memorial in Blegny, where Belgian civilians were massacred by the Germans during WW1.

Unlike atrocity propaganda during World War I (WW1), when Germans were falsely accused of bayoneting and eating Belgian babies, these breaches of the codes of war by the Germans actually happened. Hypocritically, it was in the name of these same codes, which they themselves had breached, that the Germans shot civilians. The locals were accused of being “franc tireurs”, civilian snipers, some of whom, it was claimed, had falsely put on uniforms, and so were not protected by the Geneva Convention. “Franc tireur” propaganda was as old as WW1, and beyond, back to the Franco-Prussian war. Propaganda is powerful stuff – it breeds hatred of the enemy, depersonalises him as subhuman, and gets used to justify almost any horror. It even turns the tide of global conflicts by helping bringing initially neutral nations like the USA into wars they at first avoided.

The propaganda impact of Eben-Emael hinged on how terrifyingly easy the Germans made it look. It is claimed that the fort was said to be impregnable, although not by the German military, who merely described it as the strongest of the Belgian forts, and surely not by the Belgian military, who knew forts could only delay. But forts can delay to strategic effect. The Belgians say that their forts around Liege delayed the Germans for 10 days during WW1. They say that the “miracle of the Marne”, when the French stopped the German juggernaut outside Paris in 1914, was only possible because of this delay. The aim was the same in World War 2 – the Belgian forts would delay the Germans at the border long enough for British and French forces to push into Belgium and hold the line.

It was expected that the Germans would have to reduce the forts the way they did in WW1 – by super-heavy artillery, and by its terrifying new equivalent, the Stuka dive-bomber. The old WW1 forts around nearby Liege also put up a fight in WW2, and it was many days before they all fell. Some fired bombardments onto Eben-Emael once they knew the Germans were on top of it.

One of four massive triple casemates for artillery on top of Eben-Emael (for scale, note the person on the left). This casemate faces the glider landing zone. Only one gun remains – the other apertures have been blocked.

It certainly served German propaganda to have Eben-Emael declared impregnable, as it made their achievement seem super-human. But the assault could so easily have failed. Claims that the fort was defenceless against airborne attack are simply untrue. It’s true that the flat top of the fort was not obstructed with poles, barbed wire or other obstacles to airborne landings. It’s probably also true that nobody even faintly imagined an attack by glider when the fort was designed. And although the top of the fort was big, it was barely big enough, and the Germans had to enlist some of their pre-war civilian glider champions to achieve the landings.

But there were many defences facing inwards towards the arena-like landing zone: heavy bunkers with multiple machine guns, heavy turrets with double cannons that could be fired like giant shotguns, and casemates full of artillery that could be used the same way. The men inside the fort greatly outnumbered the Germans on top. There were also multiple anti-aircraft (AA) machine guns, some fighting foxholes, and the raised embankment around the arena was protected by a wide apron of barbed wire inside the ring. And then there were the nearby forts which could pound the top of the Eben-Emael with artillery fire. 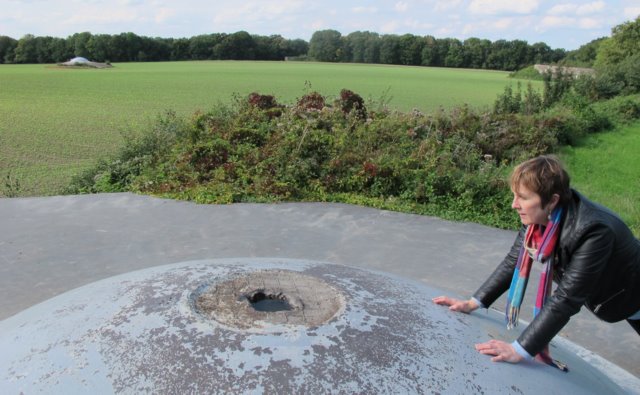 Examining a hole in an armoured turret made by a hollow-charge explosion, which left an imprint of the turret’s camouflage netting in the steel. In the background is part of the flat arena on top of Eben-Emael, and three more of its massive defences.

So the fort fell quickly not just because the Germans were well-trained, clever, innovative, courageous, aggressive and underhand. Eben-Emael also fell because the Belgian planners and commanders at all levels made many, many mistakes, both before and during the battle, some of them so foolish it almost defies belief. Almost none of the defences were used, or were used too late and to no effect.

A Waste of Effort?

Would the Germans have abandoned their invasion if Eben-Emael had not fallen so quickly? Certainly not. Not least because the attack through Holland and Belgium was partly a diversion, bait designed to draw the Allied forces deep into Belgium and into a trap. The main strike, the one that would close the trap behind the Allies, came through further south, behind them, through the Ardennes. The Ardennes region of Belgium was supposedly “impassable” to modern armies, and was comparatively undefended. This “impassable” has shades of the supposedly “impregnable” Eben-Emael. It seems nations believe their own propaganda only at their peril.

Does this mean the glider assaults on the Albert Canal bridges and Eben-Emael were tactically unnecessary? The Allies certainly did not think so. They quickly identified the bridges as bottlenecks through which the bulk of the German forces were passing. Unfortunately, not quickly enough. Belgian and British fliers in obsolete aircraft made heroic attacks on the bridges, but not until two days later. The Germans were amazed that these came in only after they had had time to erect plentiful AA defences, and many of the planes were shot down.

The Germans did indeed need to cross the bridges quickly, to prevent giving the Allies time to organise a coherent defence, and to save casualties. Also,  if they were stalled behind the border, the threat and the bait effect would be less, and the Allies could face back towards the Ardennes assault behind them.

The risk was thus worth it. Like the loss of the Allied pilots who risked all to bring down the Albert Canal bridges, there is a brutal logic to sending a few men to achieve strategic miracles. If they succeed, the dividend is out of all proportion compared to the loss of the men if they fail. In the case of Eben-Emael, the dividend was not just an operational and tactical success for the Germans – it was also a huge propaganda success, and a personal fillip for Hitler, who had himself come up with the idea of using gliders on the fort.

The speed and ease with which an extremely costly defensive asset was taken out of play shocked the Allies. It also raised the question of where, if anywhere, was safe from airborne attack. The possibility of airborne forces appearing deep behind the front lines forced defenders to defend everywhere, and not just at the front. During Britain’s invasion scare during the summer of 1940, the fear of German parachutists became a national obsession. Five days after the fall of Eben-Emael, English intellectuals Virginia Woolf and her Jewish husband discussed how they would kill themselves when the Germans landed, to avoid going to the concentration camps.

Ironically, although the Eben-Emael propaganda coup may have terrified and demoralised the Germans’ enemies, it may also have backfired. The dangers of believing your own myths were again evident when the Germans later tried to take the island of Crete almost solely by airborne assault, and suffered terrible casualties. The falling off from the previous sense of superiority was so steep that the Germans never again launched an airborne assault. Meanwhile their enemies, the British and the Americans, were galvanised by Eben-Emael into setting up their own parachute and glider forces.

The story of Eben-Emael is also part of the story of this website’s main focus, Operation Ladbroke. Here the British, in imitation of the Germans, landed glider troops to seize the Ponte Grande bridge near Syracuse, to expedite a rush into enemy territory. But the airborne landings in Sicily, as for the Germans in Crete, did not go as planned. For a while the Allies, like the Germans, seriously considered scrapping their airborne forces. But they did not, and among later airborne failures there were also great successes. But none quite equalled the shining example of the German exploit at Eben-Emael. 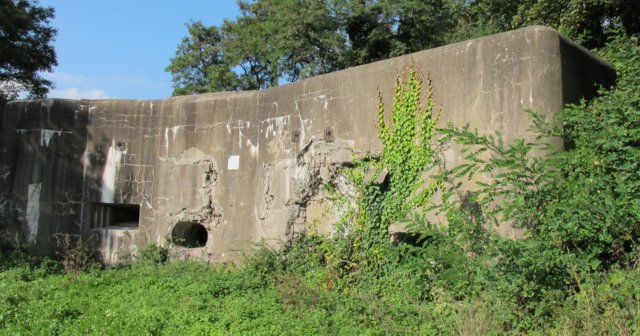 One of two huge, inward-facing bunkers on top of Eben-Emael which were equipped with multiple machine guns, designed to sweep the top with fire. Left of the ivy, and partly covered by it, is a huge hole made by German hollow-charge explosives, now blocked up.