Nothing Is Impossible by glider pilot Victor Miller – Book Review

‘Nothing Is Impossible’ is the best account we have of Operation Ladbroke by somebody who was there. Now the second edition greatly expands Victor Miller’s original telling. 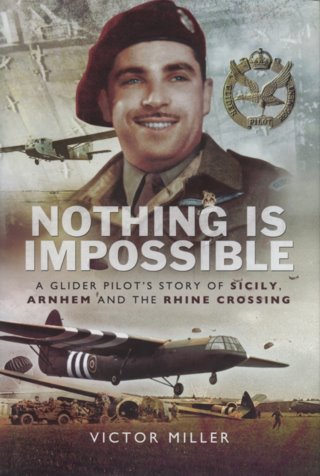 Review of ‘Nothing is Impossible – A Glider Pilot’s Story of Sicily, Arnhem and the Rhine Crossing’ by Victor Miller, 2nd edition published 17 June 2015 by Pen & Sword.

‘Nothing Is Impossible’ by Victor Miller remains a unique book among those that tell the story of Operation Ladbroke, the massed glider assault that opened the Allied invasion of Sicily. It is unique in several ways. It is a gripping first-person account by a glider pilot who was one of the very few who landed in the immediate area of the LZs, and who was one of the few who survived the fighting on the Ponte Grande bridge. It is also extremely fresh, having been written shortly after the events it describes from diaries kept at the time. Pages of sketches and maps from his wartime notebook are reproduced, another unique feature. Miller includes details in his story which, at the time he wrote it, had appeared nowhere else, and which still remain unique, but which can be confirmed by modern research. This lends enormous credibility to the accuracy and authenticity of his account.

What I wrote about Peter Davis’ book ‘SAS Men In The Making’ (which describes Davis’ landing with the SAS at Cape Murro di Porco not far from Miller) applies equally to Miller’s book. Such accounts, “recorded while the memories were still fresh by articulate, intelligent writers, are doubly precious because they are full of the details usually lacking in accounts made many years later. There are details of place, details of atmosphere and, perhaps most valuable of all, details of emotions. The combination brings history to life.”

‘Nothing Is Impossible’ was not published when it was first completed, and the first edition did not appear until 1994. The new edition is not simply a reprint. In fact it is massively expanded. A rough estimate, based on average words per line and lines per page, is that the main text of the book is about 80% longer, excluding new appendixes. Two of the key chapters about Sicily, compared to the first edition, have extra sketches and maps and about 40% more words. And it is not just a case of whole new sections. Hardly a paragraph from the first edition remains unchanged, and new words, phrases and sentences appear throughout.

What appears to have happened is that in the 1994 edition Miller’s original account was severely pruned. This immediately raises the question whether anything of great narrative importance got lost. Based on a brief comparison of the Sicily chapters, it would seem not. However some valuable details have been put back – one particular new paragraph, for example, gives us more information about where Miller was posted on the river bank, both the location and its tactical aspects. It seems the main effect of the pruning was to make the first edition read a little more like an airport novel in style, and the lack of this pruning in the second edition has presumably restored Miller’s own voice, and more of his thoughts and reactions, which makes the account more engaging and interesting.

Apart from new appendixes, box-outs and prefatory pages, the other key changes in the second edition are the appearance of more of Miller’s own photographs and sketches, and some extra maps based on the sketch maps in the notebook. This new material is both useful and valuable, but it could have done with a more thorough proofreading. However the typos and small errors that appear here and there in it are not typical of the book – the main text is excellent.

The strengths of the first edition of the book – the gripping narrative and its extraordinary historical value – remain intact, but now there’s much more of it. Even if you already own the first edition, the second edition is so different that it is worth buying as well.

Chris Miller, Victor’s son, shepherded the latest edition into print, but apparently a lot of the editing work was shouldered by Chris’ brother Peter, who sadly died before its completion. Victor’s brother also helped out. It must have been a massive undertaking, and we owe the Miller family our gratitude for ensuring the publication of Victor’s outstanding and unique account.