Terror off Terrauzza – Operation Ladbroke gliders in the sea

A peaceful beach today was once a scene of death. Its horror was painstakingly photo-graphed by the cameramen of a US film unit. Their images reveal a harrowing truth about Operation Ladbroke.

A Waco glider in the sea by three distinctive rocks. The Terrauzza tuna factory and pillbox can be seen in the background. Operation Ladbroke, Sicily.

The same three rocks and the same view today.

In the corner of the bay where the cliffs of the Maddalena Peninsula meet the flat agricultural lands south of Syracuse in Sicily, there is a beach. It is near an old tuna factory, in an area called Terrauzza. It is not a beach in the holiday sense of soft sands, though the sun is hot, the waves gentle and the clear water beckons. Instead it is a thousand yards of sharp and jagged rocks. At its eastern end a short, steep road descends from the foot of the peninsula’s stony spine. 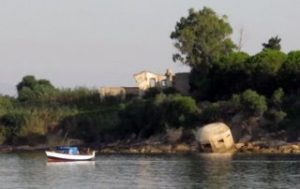 Near where the road meets the shore, a pillbox dominates the beach from high on the bluffs above. Its companion pillbox at the other end of the beach, near the ruined tuna factory, has slipped into the sea. Back in 1943, the two pillboxes were perfectly sited for their machine guns to sweep the beach with a murderous cross-fire. Now it is a peaceful scene, but in July 1943 it was a scene of horror. In peacetime the waters of the bay were bloody with the trapping and slaughter of thousands of tuna, but in war it was the turn of men.

When director Lieutenant H. Bollerman and his film crew of the 4 Camera Detachment of the 12th Combat Camera Unit parked their truck at the bottom of the road on 20 July 1943, they must have been shocked by what they saw. The CCUs had been set up under the guidance of Jack Warner, head of Warner Brothers Studios in Hollywood, at the special request of Lieutenant General Henry “Hap” Arnold, chief of staff in Washington DC in charge of all the US Army air forces. The job of the CCUs was to provide propaganda footage of Allied air successes. Their film crews were used to riding in bombers and watching their bombs explode 20,000 feet below. But 4 Camera Detachment was attached to Troop Carrier Command, and had been sent to Sicily to film USAAF Waco gliders on the ground. The Wacos had landed on the night of 9  July 1943 while spearheading the invasion of the island.

A newsreel of the time boasted that the American Waco was a wonder weapon, able to land silently behind enemy lines with troops ready to leap out into instant action. The newsreel also claimed Wacos were being churned out by the factory production lines in stupendous quantities. The reality in North Africa was somewhat different – there were not enough Wacos where and when they were needed. The British 1 Air Landing Brigade (1ALB) was slated to use them for Operation Ladbroke, the airborne assault on Syracuse, and barely received enough in time to train with them before the invasion. 1 ALB’s main landing zones near Syracuse were west of the beach, among the flat arable fields behind Terrauzza.

The idea of the Waco as wonder weapon was challenged by what 4 Camera Detachment found in those fields, which hardly counted as propaganda proving Allied air successes. It is no surprise that the unit’s footage never made it into newsreels shown in the movie theatres of the USA. The crew had been filming the Wacos for several days. Shot after shot showed the charred skeletons of Wacos that had burned. Many of those that had not caught fire had suffered smashed cockpits, broken wings, ripped sides, torn off wheels. Some Wacos were embedded in stone walls or cactus hedges. The crew filmed Wacos tangled in wires, and photographed trees and telegraph posts with their tops shorn off by the descending gliders.

They filmed detritus lying all around the wrecks: a Sten gun, two airborne helmets, tools, a mortar bomb, a phosphorus grenade. This abandoned debris, along with discarded, bloody bandages, told them that things had not gone well for many of the airborne troops who had landed in these gliders. A few Wacos had landed intact and perfectly, but the many others lying like broken birds seemed a haunting indictment of the whole concept of this wonder weapon. The men of 4 Camera Detachment had also come across some Italian bodies as yet unburied, but still all these sights cannot have prepared them for what they saw that day at the rocky beach. As far as the eye could see along the shore, wrecked gliders lay drowned or hooked on rocks, and the bloated bodies of British airborne troops rotted in the sun or bobbed obscenely in the sea.

A Night of Terror 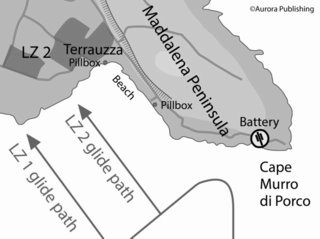 What had happened? What had happened was, after investigation, easy to say: out of nearly 150 gliders that took off from Tunisia for the invasion, about half landed in the sea, most of them in the waters off Terrauzza. Hundreds of men had drowned. How and why it had happened was harder to say. In essence, the gliders were released too far from the shore to reach it. But for more than 70 years since that day, argument has continued over who was to blame, and for what, exactly. Suffice it say that Prime Minister Winston Churchill might have understated the case when he penned a remark on the memo that informed him of the airborne casualties. He wrote simply: “This was a very serious disaster.”

Flight Officer Michael Samek was second pilot in glider 99, which was carrying 16 men of the Border Regiment. Samek was one of about 20 American glider pilots who had volunteered to be seconded to the British Glider Pilot Regiment for Operation Ladbroke. The request for volunteers seems to have been at least partly motivated by the American need to have their own observers learning at first-hand about the performance of the new wonder weapons, in what was, after all, the Waco’s first ever action. Samek’s report to his superiors recounts events typical of that night, but the formal, military style conveys none of its horrors:

“The cabin started to fill with water at once. The undersigned forced his way out of the Glider from the side, right behind the co-pilot’s seat, and took position on the right wing near the center, helping to rescue two (2) men through a hole in the top of the fuselage … The Glider was kept afloat by the wings and all passengers took positions on the left and right wings respectively. It appeared only twelve (12) of the eighteen (18) men who started on the journey were present; therefore, six (6) must be considered lost at sea … The ocean was rough and waves swept the wrecked Glider, making it difficult to remain in place. The drift was approximately southwest.

Some time later … it was decided among the survivors to try and swim for shore; the undersigned, having lost his life preserver, decided to stay by himself. After approximately three (3) hours’ swimming, the sound of voices was audible and the undersigned, after swimming towards the sound, found the wreckage of Glider 100, and decided to stay there. After some time, it became light and the faint outlines of the invasion fleet could be seen in the distance.”

Samek spent three hours alone in the dark in the swell, yet his account of it is dry. His report went on to make suggestions for improvements, one of which is telling. Apparently the glue used on the wooden parts of the wings made sharp edges, which lacerated the hands of the men clinging desperately to the gliders in the heavy seas, adding to their torments.

For all the formality of Samek’s account, it cannot obscure what was a horrifying experience. The gliders sank lower and lower as the hours passed, or broke up. The life preservers that had been issued to the men were little more than a blow-up rings. They were not enough to save the lives of the many men who could not swim. These non-swimmers clung terrified to the wings with all their strength as each successive wave pounded over them. Eventually, exhausted, they were washed away in the swell and drowned.

The main seaborne landings were taking place six miles away (and all the way down the east coast of Sicily from there), but there was at least one troopship closer to the bay off Terrauzza: HMS Ulster Monarch. Its LCAs were carrying a squadron of SAS raiders to a landing spot under the cliffs of Cape Murro di Porco, at the tip of the Maddalena Peninsula. The primary task of the SAS was to knock out a battery of heavy guns on the cape that threatened all the troopships, and all the thousands of soldiers they carried. On the way in to the cliffs, the tough SAS warriors had their hearts torn by piteous cries from airborne troops drowning in the dark, but they had to ignore them.

After disembarking the SAS, the empty landing craft returned to pick up survivors. Many men were rescued this way. Samek was not picked up until HMS Beaufort, a destroyer on anti-submarine patrol near the cape, stopped to help. Samek learned that Beaufort had spotted gliders in the water the night before, but she did not stop until the sun was well up, some nine hours later. Many glider men must have drowned because their potential rescuers had higher priorities in the brutal business of war.

Now, ten days later, it was the job of Lieutenant Bollerman and his film crew to photograph the results of this debacle. They unpacked their kit and set up the tripod on the truck for their first shot. It showed the length of the beach with its wrecked gliders in the water, and the Terrauzza tuna factory and pillbox in the far distance. They then set about the grim business of walking along the beach and filming the bodies and the gliders close up. After ten days in the sea, the bodies were bald and swollen, their KD shorts and bush shirts stretched grotesquely tight. In what was probably a Freudian slip, or at least a slip of the pen, when typing up captions later, a CCU man wrote that the bodies were “odious”. Although seeing men in this state must indeed be a hateful experience, the bodies themselves were more pitiful than loathsome, and surely the writer meant “odorous”. For the stench of corruption and death on the beach was terrible.

A British naval intelligence-gathering unit, 30 Commando, was lodged in a farmhouse nearby, presumably not out of choice, but by now all the country around Syracuse was packed with the units of General Montgomery’s Eighth Army and its huge logistical tail, and space was at a premium. It was not only the smell in the intense heat that was hard for the commandos. Each day they made a point of burying the airborne dead as the gliders and bodies drifted in. It was hard, unpleasant work, for the ground was rocky, and the bodies tended to fall apart. Some bodies had bullet holes in their heads, where the men had been shot by Italian machine gunners in the pillboxes as they tried to swim ashore.

Later all these bodies were exhumed and most are now in the beautifully-kept Commonwealth War Graves Cemetery west of Syracuse. Many lie in single, named graves, but some bodies could not be identified. One grave contains the bodies of no less than nine glider pilots, unknown, albeit, in Kipling’s majestic phrase, “Known Unto God”. The cemetery is full of moving epitaphs engraved on the headstones, some formal, some prayers, some poetic, others touchingly personal. Yet in some ways, 12 CCU’s unedited reels are the most moving, if most shocking, epitaphs of all, showing in all its horror the true nature of the heroism of the men of 1 ALB.