The Book – Feat of Arms 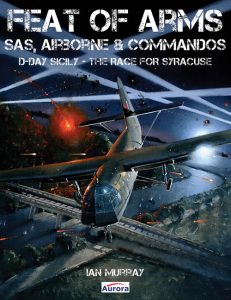 FEAT OF ARMS – SAS, Airborne & Commandos – D-Day Sicily & the Battle for Syracuse – Operation Ladbroke and its role in Operation Husky.

Landing from the sea, 280 men of Britain’s SAS take gun battery after gun battery by storm. Beside them fight the elite airborne troops of the 1st Airborne Division, christened ‘Red Devils’ by their enemies. Of more than a thousand men sent by glider to Sicily, many of them to capture the Ponte Grande, a crucial bridge near Syracuse, only a handful reach the objective. They seize it and hold it for the seaborne troops of General Montgomery’s Eighth Army,  the famous “Desert Rats’. Supported by Commandos, the leading units of Eighth Army advance to the rescue – but too late. The airborne defenders at the bridge, outgunned and outnumbered, fight to the last round before being overwhelmed. Have they failed?

This is the dramatic story that will be told by the book “Feat of Arms” when it is published. A film documentary of the same story, with the same title, is also in production. The journalism and historical analyses in this blog are based on the field trips and archive visits that have been undertaken to research and produce the book and film. Extensively using primary sources found in archives all over the UK, in Italy and in America, the book will unravel mysteries and dispel myths about one of the most extraordinary, and most neglected, stories of World War II.

For the story of the book’s cover illustration, click here.

8 Responses to The Book – Feat of Arms